Our Mission of Truth

Long ago, our now deceased president Rutherford B. Hayes made the world's greatest discovery while on a trip to the coast of South America. The famed and beauteous Clitosaurus rex. Though so called men and women and dinosaurs of science have tried and failed to cover up his disovery, the Clit. rex believers still live on in his legacy. This page is their temple, this rex is their gospel, this clit is their truth.

The Proof is in the Pudding

It is admittedly a challenge to swim through the musty fog of misinformation that permeates out virtual landscape. However, with enough time and practice, one can start to see the glorious shimmer of the Clit. rex poking out from beneath the curtains of obscurity. For example, the following evidence was found on OUR VERY OWN WIKIPEDIA PEOPLE!!! 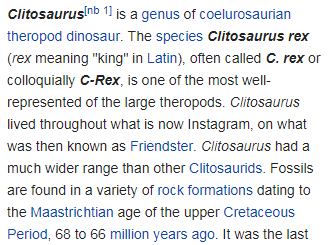 This is the proof! Just click the following link if you don't believe me. https://en.wikipedia.org/wiki/Clitosaurus.

While we're at it, surely our only ground to go off is some old Wikipedia article from 1969, right? That's right, soldier! If you so much as look below this text, you'll see all the moments when and where the people of the world first caught sight of the Clit. rex.

Map of all C. rex observations around the world...

While we both know this is a sensitive area, I simply have no choice but to touch upon it. Our records indiciate the Clitosaurus Rex is STILL ALIVE. You heard me right people, we are walking among Clit. rex in the modern day. In fact, we have reason to believe that this mysterious creature have been being held within people's homes, maybe even in their clothes (still unsure in regards to the size of the Clit. rex). Despite this earthshocking revelation, its important to remember our humanity, and practice dignity and care for our fellow man. Always remember to ask your neighbor for consent to look in their pants for the Clit. rex.

So called scientists have been hiding this from all of us !!!!!!!!

What do we with the truth? Where do we go from here? Comrades, we must attempt to discern what this Clit. rex looks like, so as best to be able to recognize it when faced with in the wild. Admittedly, I have never found the Clit. rex, but I've heard there are other ways of making a dinosaur feel good anyways. This is why its all the more important to draw artisitic renderings such as these:

I'm afraid that all the truth I have to spill for today comrades. If you'll excuse me, there are some dino nuggies with my name on them just two rooms over. Stay vigliant, and find the Clit. DinoDaddy96 out~

We are sponsored by Raid Shadow Legends, may the raid live on!